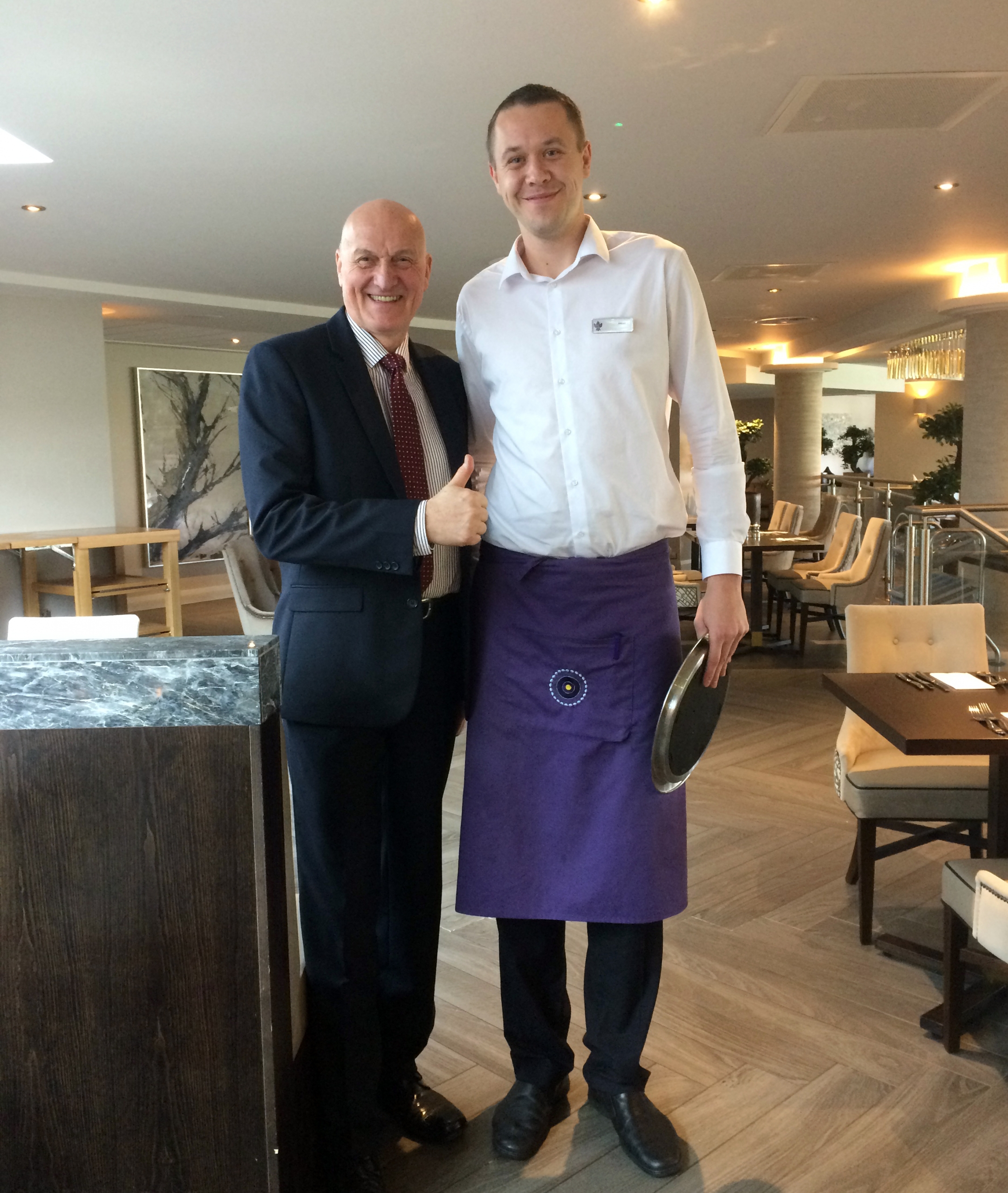 Yesterday I had a wonderful time in Birmingham speaking at the Squire Patton Boggs Real Estate European Offsite Event. Squire Patton Boggs are a highly respected firm of solicitors with 46 Offices in 21 countries. It was an honour to be chosen to speak at this high-profile event.

I arrived early to set up as I always do. I checked my presentation was working well and my headset and speaker was set at the right level; then I went back to the restaurant area to have a pot of tea and to relax prior to my talk later that morning.

He was a giant!

While relaxing I noticed a member of staff in the distance who looked incredibly tall. He was towering over the other staff and customers and had to duck to go through the door. As a former professional basketball player and 6ft 4in tall I am not used to seeing people taller than me.

So, I just couldn’t resist going over to him to have a photo taken. It turns out that Anton Pisaruk was a professional basketball player in Lithuania for many years and had recently stopped playing due to injury. He is 7 foot tall and it brought back memories of when I played professionally myself and was always surrounded by players taller than me.

Great feedback from my talks

One thing which comes up in comments on my talk is the authenticity of my story. How it somehow makes the techniques I teach and the information I share come to life. I believe that authenticity is very important, as is integrity.

Davis Love is a true legend

In 1994 golfer Davis Love called a one-stroke penalty on himself during the second round of the Western Open. He moved his marker out of the path of another player’s putting line; then later he couldn’t remember if he’d moved his ball back to its original spot. Since he wasn’t certain, he gave himself and extra stroke.

And that one stroke caused him to be eliminated from the tournament. At year’s end Love was $590 short in winnings to automatically qualify for the Masters, and needed to win a tournament to get into one of golf’s most coveted events.

Doing the right thing paid off

Fortunately, the story end well. The week before the big event he qualified by winning a tournament in New Orleans, and went on to earn $237,600 by finishing second in the 1995 Masters.

Later when asked how he’d have felt if he’d missed the Masters because of calling a penalty on himself, Love replied, ‘The question is how I’d have felt if I’d won and spent the rest of my life wondering if I’d cheated.’

What a great example of integrity – no one would have known apart from Davis alone if he had ignored that feeling he had inside. What I love about this story is that he was $590 short of qualifying and by doing the right thing he ended up winning $237,600. I don’t believe that this was luck – the Law of Attraction comes to mind!

1. The Law of Attraction says that what you give out is what you get back
2. Doing the right thing every time means life will eventually reward you for that
3. When you are faced with a choice between right and wrong choose right.

Well that’s it for this week.

Have a wonderful weekend and stay positive.