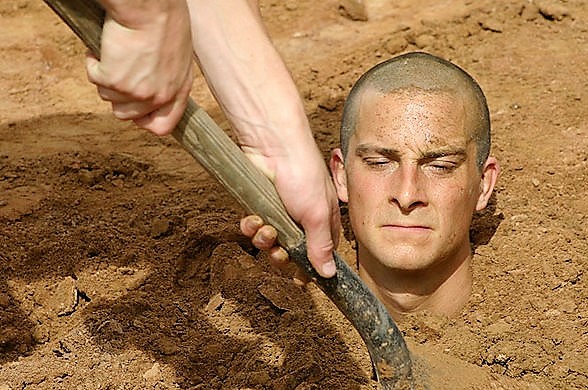 After leaving school, he briefly considered joining the Indian Army and hiked in the Himalayan mountains of Sikkim and West Bengal. Eventually, he joined the Territorial Army and, after passing selection, served as a reservist with the SAS in 21 SAS Regiment (Artists) (Reserve), for three years until 1997.

In 1996, he suffered a free-fall parachuting accident in Zambia. His canopy ripped at 16,000 ft, partially opening, causing him to fall and land on his parachute pack on his back, which partially crushed three vertebrae.

It took time but he never gave up hope

He later said: “I should have cut the main parachute and gone to the reserve but thought there was time to resolve the problem”. According to his surgeon, he came “within a whisker” of being paralyzed for life and at first it was questionable whether he would ever walk again. He spent the next 12 months in and out of military rehabilitation.

In a showcase of what pure determination and hard work can do, on 16 May 1998 he achieved his childhood dream and climbed to the summit of Mount Everest, 18 months after breaking three vertebrae in a parachuting accident.

He achieved his dream

At 23, he was at the time among the youngest people to have achieved this feat. This is the inspirational story of the amazing Bear Grylls. He is known to the world as a television presenter for the Discovery Channel, with his own show called Man Vs. Wild.

We all face the dark times

We often think that people who have made it, have it easy in life and that things just fell in their lap. But the truth is that in 99% of cases, those very people have had to work very hard and have had to face many setbacks.

These setbacks can break people and often do. I often wonder how many people have given up just before they were about the break through, or I wonder how many inventions have never come to market because people gave up too soon.

When things are tough it is natural to want to give up. Everyone has doubts, everyone has times when they want to give up, but the people who finally succeed are the ones who don’t stay in that negative place. They find a way to get themselves back up and positive again.

A great meeting in London

I met with Kimo Kippen from Hilton Hotels in London this week and a nicer man you will never meet. We had a wonderful evening meal together and some great conversation. I first met Kimo in Dubai and it has been an honour getting to know him. We intend to meet up again later this year.

1. When you have a setback how long do you stay in a negative state?
2. Observe yourself over the next week and see how much of the time you are negative
3. To get yourself out of a negative frame of mind, list off a few things you are grateful for and focus in them, then see how quickly you can start feeling better.

Well that’s it for this week

Have a really great weekend and stay positive.