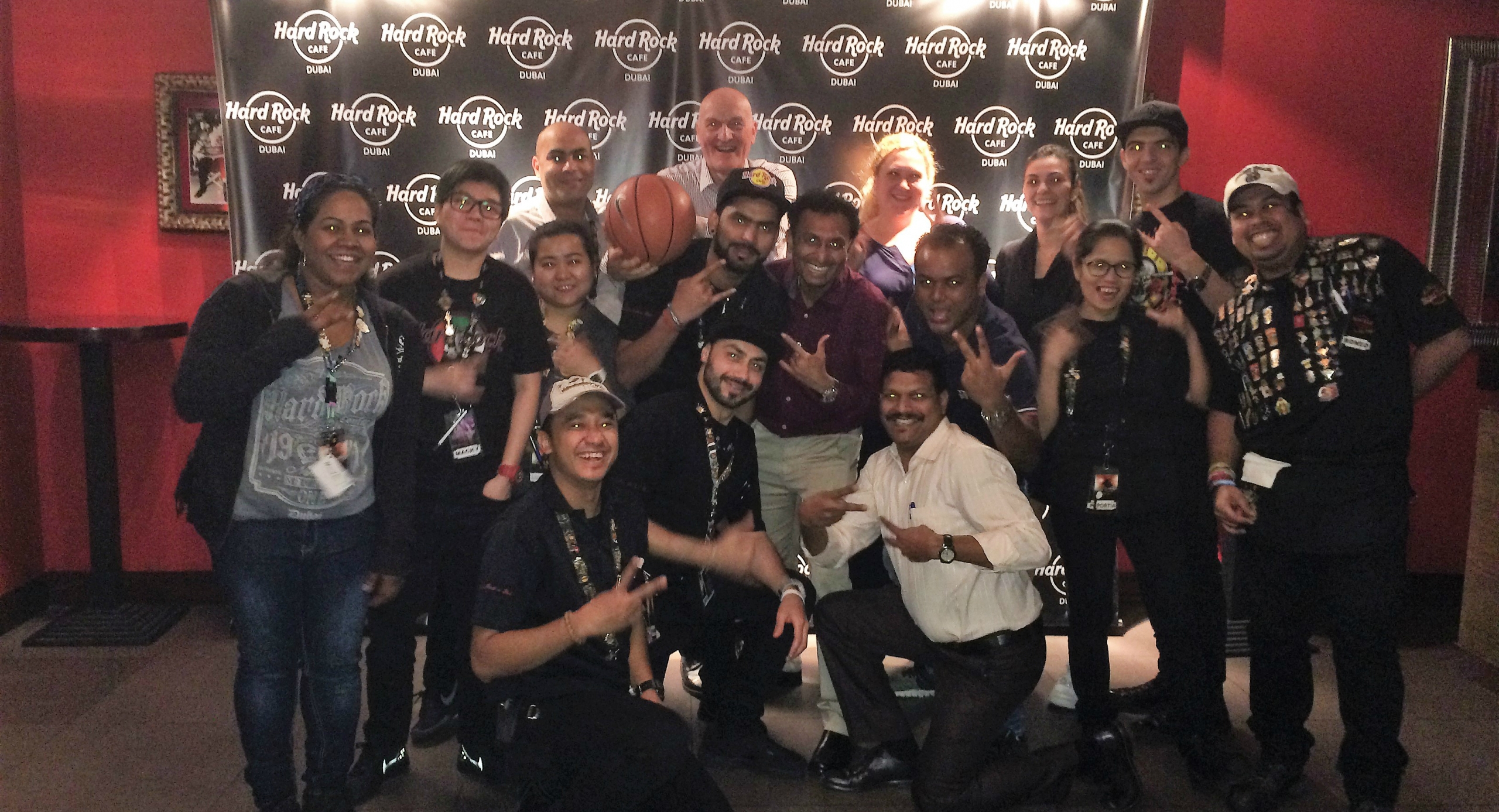 Dubai was a great trip and running my Mental Resilience Masterclass for the British University in Dubai, and the Hard Rock Café staff were the highlights of my time there. What two great groups they were. As you can see from the photo the staff must be of a certain character to work for Hard Rock.

They have great energy and colourful personalities which makes the experience of dining there very special. We had the privilege of dining there on a couple of occasions and we can vouch for the quality of food and the table service.

Hard Rock Cafe International, Inc. is a chain of theme restaurants founded in 1971 by Isaac Tigrett and Peter Morton in London. They were two shaggy-haired Americans who just wanted to find a good American burger while living in London.

They opened up their own American style diner in an old Rolls Royce dealership and called it Hard Rock Cafe. They were only given a 6-month lease by the landlord who didn’t believe it would last. In 1973 Paul McCartney and Wings performed an impromptu concert at Hard Rock Café as a warm up gig for their 1973 UK tour.

The cafes solicit donations of music memorabilia but also purchase a number of items at auctions around the world, including autographed guitars, costumes from world tours and rare photographs; these are often to be found mounted on cafe walls.

The collection began in 1979 with an un-signed Red Fender Lead II guitar from Eric Clapton, who was a regular at the first restaurant in London. Clapton wanted management to hang the guitar over his regular seat in order to lay claim to that spot, and they obliged.

This prompted Pete Townshend of The Who to give one of his guitars, also un-signed with the note “Mine’s as good as his! Love, Pete.” Hard Rock’s archive includes over 80,000 items, and is the largest private collection of Rock and Roll memorabilia in the world.

In 2007, Hard Rock was sold to the Seminole Tribe of Florida, and since then it is headquartered in Orlando, Florida. As of December 2015, there were 191 Hard Rock locations in 59 countries, including 168 cafes, 23 hotels, and 11 casinos. HRC is known for its collection of rock and roll memorabilia.

One thing which stood out when we met the staff at Hard Rock was that we felt better having met them. The energy and positivity that emanated from them had an impact on us. Their warmth and enthusiasm rubbed off on us. This is clearly one of their key ingredients. They really loved my training on Mental Resilience with great feedback.

The staff turnover at Hard Rock is extremely low and there is a real commitment to the brand and to their values. This made me think of Commitment – one of the 5 key pillars of Mental Resilience. They are fully committed to giving the diners a unique experience throughout their visit and they are committed to the company.

The quality of the food is wonderful and together with the enthusiastic staff ensures that people come back again and again. The staff know that every moment the customer stays in the restaurant is important and should be thoroughly enjoyed. The Hard Rock in Dubai even has a large stage where there is live music in the evenings.

We had a fabulous time in Dubai and working with the staff of the British University in Dubai was extremely enjoyable and very effective. The staff at the Hilton Doubletree looked after us so well, and connecting with Graham a director from Rolls Royce in Abu Dhabi has been another highlight. It was really good to meet Mike from Emmar Properties and we are looking forward to seeing what happens next in Dubai.

1. Achieving things which seem to be out of your reach can seem impossible, but if you keep pushing forward you will be amazed to see what you can achieve.
2. We all have a belief system which we have developed over time, and is moulded by the experiences we have had.
3. Our belief system may be real to us but it may not be real. I used to believe that I couldn’t stand up and speak in front of a few people because of my negative experiences growing up.
4. I challenged those beliefs and I now enjoy speaking in front of hundreds. I have challenged many other false beliefs and have changed them.
5. What do you believe you can’t do? I encourage you to challenge those long held beliefs, and test the limits you have put on yourself.
6. Don’t be held back by a false belief system – challenge it and break out!

Well that’s it for this week. Have a really good Easter weekend and I look forward to connecting with you next week.