Are You Held Back by Your Beliefs? 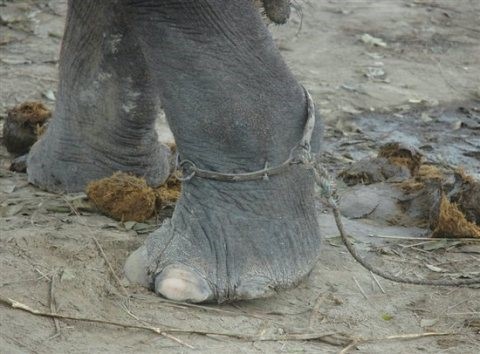 “As a man was passing the elephants, he suddenly stopped, confused by the fact that these huge creatures were being held by only a small rope tied to their front leg. No chains, no cages. It was obvious that the elephants could, at anytime, break away from their bonds but for some reason, they did not.

He saw a trainer nearby and asked why these animals just stood there and made no attempt to get away. “Well,” the trainer said, “when they are very young and much smaller we use the same size rope to tie them and, at that age, it’s enough to hold them. As they grow up, they are conditioned to believe they cannot break away. They believe the rope can still hold them, so they never try to break free.”

The man was amazed. These animals could at any time break free from their bonds but because they believed they couldn’t, they were stuck right where they were. Like the elephants, how many of us go through life hanging onto a belief that we cannot do something, simply because we failed at it once before?

Failure is part of learning; we should never give up the struggle in life.”

I read the story above recently and was struck by how easily we can create a belief which is real to us but may not be real. We may believe that we can’t do something because it has always been this way or we failed before, therefore it can’t be done. But I regularly encourage my coaching clients to challenge those beliefs and once they do, amazing things start to happen.

It is quite unbelievable how quickly these beliefs become our reality, holding us back from achieve great things in our lives. I have personally had to break many belief systems which held me back over the years. Those of you who know my story know that I couldn’t speak on public and had no self-worth.

I have challenged these beliefs plus others over many years and I am pleased to say that I have broken all the ones I am currently aware of. Once broken a new life appears which is full of sunshine, happiness and above all hope.

The following is a truly inspirational story of a young man who didn’t believe what the doctors and experts were telling him and his belief system changed his life forever.

From Wheelchair to World’s Fastest Man

“Once, a young school boy was caught in a fire accident in his school and was assumed that he would not live. His mother was told that he was sure to die, for the terrible fire had devastated the lower half of his body. Even if he were to survive, he would be a cripple throughout his life.

But the brave boy did not want to die nor did he want to be a cripple. Much to be the amazement of the doctor, he did survive. But unfortunately, from his waist down, he had no motor ability. His thin legs just dangled there, lifeless. Ultimately, he was discharged from the hospital. But his determination to walk was indomitable.

He wouldn’t give up

At home, when he was not in bed, he was confined to a wheelchair. One day, he threw himself from the chair and pulled himself across the grass, dragging his legs behind him. He reached the picket fence, raised himself up and then stake by stake, he began dragging himself along the fence, his resolve to walk undeterred.

He did this every day, with faith in himself that he would be able to walk unaided. With his iron persistence and his resolute determination, he did develop the ability to stand up, then to walk haltingly, then to walk by himself and then to run.

He began to walk to school, then run to school, to run for the sheer joy of running. Later in college he made the track team. In February 1934, in New York City’s famed Madison Square Garden, this young man who was not expected to survive, who would surely never walk, who could never hope to run – this determined young man, Dr. Glenn Cunningham, ran the world’s fastest mile.

An epitome of the power of positive thinking and faith in one’s self, Glenn Cunningham continues to be an inspiration for many, and his story, a brilliant testimony to how one can bounce back even when all odds are stacked against one, to the extent that death seemed the preferable option.”

Wow what a great example of Mental Resilience and sheer hard work. This boy faced living life in a wheelchair but he didn’t see this inside his head. He saw himself first of all walking then running. He visualised himself upright and happy. He saw himself independent walking and running whenever he pleased. He paid the price for happiness in hard work and self-belief and it paid off.

This has been an amazing week for me with several new clients wanting to work with me. I believe that 2017 is going to be a breakthrough year and I am gearing up for that. I have organised the office and systems and have order in my life. International and UK wide connections are developing and I can’t wait to see what happens next!

1. Have a think about any beliefs you have which aren’t rational or that you have never challenged.
2. I encourage you to challenge your beliefs to see if they really are real.
3. You need to change your inner voice regarding these beliefs and I can email the details of how you do this to you free of charge. john@jdmindcoach.co.uk
4. Don’t give up at the first attempt at change – it takes longer than that but it is worth it.

Well that’s it for this week. Have a really good weekend and I look forward to catching up with you next week.

June 19, 2022
Read More »
PrevPreviousHow Would You Respond to This??
NextShorter blogs but Equal ImpactNext