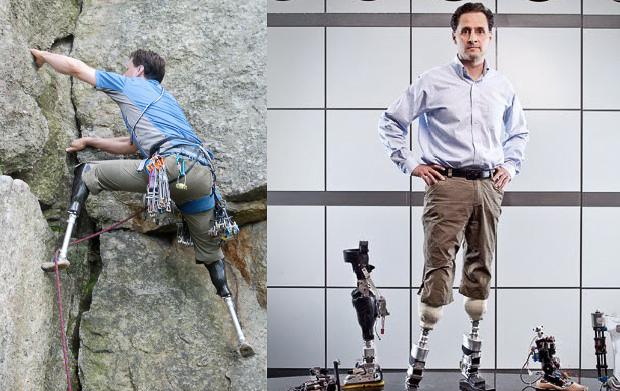 I’ve had a few comments from people who really enjoy my blogs but feel they are a little too long, so in response to this I am reducing my blogs by about half in length. We are all very busy people and if I can get the same messages, with the same impact, in fewer words, then we are all winners – so this is what I am doing from now on. This means you can enjoy these blogs in half the time!

An amazing story of overcoming adversity

“In 1982, something happened to Hugh Herr that changed his life – and ultimately would change the lives of anyone whose physical abilities had been transformed by accident or birth. A prodigious mountain climber, who’d managed to scale a 3.5 km mountain in the Canadian Rockies by the age of 8, Herr became disoriented in a blizzard and was forced to spend three nights in temperatures below minus 29 degrees Centigrade. He lost both legs below the knee.

Many would have become disheartened, depressed, chosen another career path. Not Hugh. He began by designing revolutionary prostheses enabling him not just to climb, but to climb at a higher level than ever before. The new limbs carried special feet for ice climbing or difficult rockface scaling, and allowed Hugh to alter his height for maximum efficiency and a greater range of hand and toeholds. With his designs attached, Hugh was an enhanced climber: a real bionic man.

Now, Herr designs bionic limbs that connect electrically to the wearer’s nervous system: artificial body parts that can be controlled under neural impulse. And that’s not all. Herr’s Centre for Extreme Bionics, at Massachusetts’ premier brainiac colony MIT, is developing prostheses with actual organic nerves in them, which link to the existing axons so well they can make the wearer feel like they still have genuine flesh and blood arms or legs.

These are prostheses that can dance, run, and jump. The Centre’s most emblematic success story to date is a bespoke limb for ballroom dancer Adrianne Haslet-Davis, who lost a leg in 2013’s Boston Marathon bomb attack, and whose return performance was given at a TED lecture delivered by Herr in March 2014.

This is an amazing story of a man who had every right to feel sorry for himself and to spend the rest of his life angry and asking himself ‘why me?’ But Herr is made of different stuff, with an overcoming and resilient spirit. Instead of seeing what he didn’t have, he looked at what he did have and vowed to do something positive – the rest is history.

My business has taken years to develop and during this time there were many times I wanted to give up – but I didn’t. Only this morning I received an email from a potential client I have been liaising with from Dubai who wants to run my Mental Resilience Masterclasses! This is on top to two other bookings I have received this week from substantial organisations. The message is clear – Don’t Give Up!

1. How do you respond when things go wrong?
2. Nothing worthwhile is easy to achieve, just keep going
3. You may be one phone call or one meeting from breakthrough
4. If you give up, you may never experience what you are meant to

Well that’s it for this week. The more I work on these principles I share with you weekly, the more I know they really work.

Until next weekend have a great week ahead

June 11, 2022
Read More »
PrevPreviousAre You Held Back by Your Beliefs?
NextFrom Broke to Billionaire in 5 yearsNext