Rejected but Not Defeated 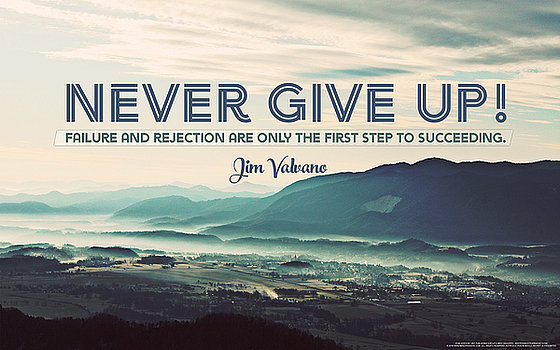 This woman needs no introduction. Her books have sold more than 400 million copies worldwide. But there was a time in her life when she was diagnosed with clinical depression and contemplated suicide. Her marriage had failed, and she was jobless with a dependent child.

She signed up for government aid (she was so poor, she could not afford to support herself and her daughter), describing her economic status as being “poor as it is possible to be in modern Britain, without being homeless.”

In 1990, while she was on a four-hour-delayed train trip from Manchester to London, the idea for a story of a young boy attending a school of wizardry “came fully formed” into her mind. In 1995, she finished the manuscript of her first book on an old manual typewriter.

The book was submitted to twelve publishing houses, all of which rejected the manuscript. Editor Barry Cunningham from Bloomsbury advised her to get a day job since she had little chance of making money from writing children’s books.

A great journey to success

Today, she is United Kingdom’s best-selling living author, with an estimated fortune of £560 million, ranking her as the twelfth richest woman in the UK. She is none other than J.K Rowling – the creator of the Harry Potter series. Saying that the Harry Potter franchise was and is a success would be an understatement.

She never gave up

JK Rowling had many opportunities to give up – when she was penniless, when her husband walked out on her, when she couldn’t afford to bring up her daughter, when she was rejected by 12 publishing houses – but she didn’t.

Because she didn’t give up and kept going she finally achieved her dream. As I go around the country speaking and running my Masterclasses, I show a video of famous people who were told to give up because they weren’t good enough.

All great achievements take effort and will power

The video features Elvis Pressley, Abraham Lincoln, Oprah Winfrey, Walt Disney, Meryl Streep, Beethoven, Steven Spielberg, Churchill and Steve Jobs. All of these were told they weren’t good enough and in the case of Elvis Pressley he was told to go back to driving a truck as he would never make it as a singer.

What if these people had listened to the negative things being said to them? Why did they continue to go for their dream and not give up? It is a combination of several things which include the all important self-belief. This is a deep inner knowing that you have what it takes to make it and nothing or no-one will stop you.

It is easier to give up

How many thousands of inventions have never come to market, or how many people have not made it to prominence because they gave up before they broke through. You can see in the case of JK Rowling it took her 5 years to produce the manuscript.

She no doubt wanted to give up many times but the dream was inside her and she kept going. Then she was rejected by 12 publishing houses yet she still continued to push the idea forward. If she had given up after the 12th rejection Harry Potter and all the spin offs would never have come to market, and JK Rowling would very likely be still living hand to mouth.

What makes the difference?

What sets these people apart? I believe it is a combination of the 5 key pillars of Mental Resilience I speak on – one of which is self-belief. Self-belief is a deep knowing that you have what it takes to make it and it is constant. Confidence can be situational. For example, I was confident playing basketball but a nervous wreck when I had to speak in public.

People who achieve their dreams know that they will have setbacks and challenges along the journey and that there will be dark days ahead. Anything worthwhile takes time and effort. But they also have the ability to bounce back from these setbacks really quickly. They don’t stay in a negative mindset for long.

I had some fun this morning when I reviewed the newspapers on the Frances Finn breakfast show live on BBC Radio Nottingham. I shared the hour with a lovely lady called Fi and we had a good laugh and talked about some very interesting stories picked from the papers.

It still amazes me how I have the confidence to speak live on air like this, and on stage when I go around the country. When I was a younger man I was a nervous wreck. The techniques I was taught to gain confidence really worked, and now I love sharing these with the people I train and coach.

1. How do you respond when something negative enters your day?
2. Make it a habit to check how you are feeling all day long.
3. If you feel negative think about the good things in your life and you will feel better.
4. Mindfulness is being in the present moment, so make it a habit to be aware of your feelings throughout each day.
5. Self-belief is your own belief system, you need to really believe that you can do it.

Off the Wall – How to Develop World Class Mental Resilience available here
https://www.jdmindcoach.com/product/off-the-wall-how-to-develop-world-class-mental-resilience/ (Special offer. Put in code 10POUND when prompted, to receive a signed copy for £10 including postage and packing – UK only)