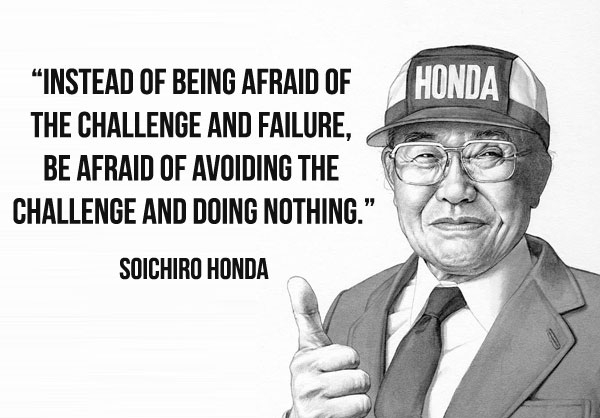 In 1938, Mr. Honda was a poor student who had a dream of designing a piston ring that he would sell to the Toyota Corporation. Every day he would go to school, and all night long he would work on his design, up to his elbows in grease.

He spent what little money he had on his project, and it still wasn’t finished. Finally, he sold his wife’s jewellery to continue.

He finally got there

After years of effort he finally designed the piston ring he was sure Toyota would buy. When he took it to them, they rejected it. He was sent back to school to suffer the humiliation of his teachers’ and friends’ telling him what an idiot he was for designing such a ridiculous gadget.

He spent the next two years continuing to find ways to make the piston ring better. He had the key formula to success:

1. He decided what he wanted.
2. He took action.
3. He noticed whether it was working or not.
4. He kept changing his approach.
5. He was flexible in the way he went about things.

Finally, after two more years, he refined his design, and this time Toyota bought it.

His dream was about to die

In order to build his piston factory, Mr. Honda needed concrete, but the Japanese Government was gearing up for World War II, so none was available. Once again, it looked as if his dream would die. It seemed no one would help him.

He had decided to build this factory. Since giving up was not an option, he got together a group of his friends, and for weeks they worked around the clock trying different approaches until they found a new way to manufacture concrete. He built his factory and was finally able to produce his piston rings.

The story doesn’t end here. During the war, the United States bombed his factory, destroying most of it. Instead of feeling defeated, he rallied all his employees and told them to run outside and watch the planes.

The planes were dropping their fuel cans out of the sky and these cans provided the raw materials needed for their manufacturing process. These were materials they couldn’t get anywhere in Japan. Mr. Honda found a way to use whatever life gave him and he rebuilt his factory.

Then unbelievably his factory was destroyed again this time by an earthquake, and he was forced to sell his piston operation to Toyota.

When the war ended, Japan was in total turmoil. Resources were scarce in all parts of the country – gasoline was rationed and, in some cases, nearly impossible to find – and Mr. Honda couldn’t even get enough gas to drive his car to the market to buy food for his family.

But instead of feeling defeated or helpless he noticed a little motor he had, one that was the size and type to drive a traditional lawn mower, and he got the idea of hooking it up to his bicycle. In that moment, the first motorized bike was created.

He drove it to and from the market, and pretty soon his friends were asking him to make some for them, too. Shortly thereafter, he’d made so many “motorbikes” that he ran out of motors, so decided to build a new factory to manufacture his own. But he had no money, and Japan was torn apart.

Instead of giving up he came up with an audacious idea. He decided to write a letter to every single bicycle – shop owner in Japan, telling them that he thought he had the solution for getting Japan moving again, that his motorbike would be cheap and would help people get what they needed to go. Then he asked them to invest.

Of the 18,000 bicycle – shop owners who received a letter, 3,000 gave Mr. Honda money, and he manufactured his first shipment. But the motorbike was too big and bulky, and very few Japanese bought it. So once again, he noticed what wasn’t working, and instead of giving up, he changed his approach again.

He decided to strip his motorbike down and make it much lighter and smaller. He called it The Cub, and it became an “overnight success,” winning Honda the Emperor’s Award. He then went on to develop a range of cars and today, Mr. Honda’s company is one of the most successful in the world.

Honda Corporation now employs over 100,000 people and outsells all but Toyota cars in the U.S. – all because Mr. Honda never gave up. He never let problems or circumstances get in his way. He decided that there is always a way to succeed if you’re really committed.”

How many times should Soichiro Honda have given up on his dreams? 5, 10, 20? I guess most of us would have given up at some stage, but he demonstrated incredible mental resilience to keep getting back up every time he was knocked down.

Well that’s it for this week have a great weekend and don’t give up!