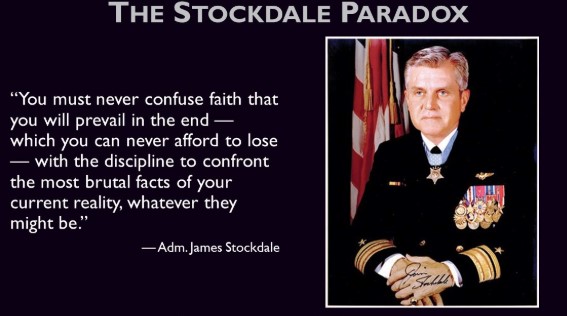 I want to thank Dennis O’Connor from Ireland a good friend of mine for telling me about this amazing story of James Stockdale who was captured during the Vietnamese war and tortured many times. Stockdale was a remarkable man whose faith and acceptance of his situation led him to survive whilst most prisoners died.

There is an excellent book called ‘Good to Great’ by Jim Collins which mentions James Stockdale and below is an excerpt from the book with a great message about Positive Thinking not being enough.


Excerpts from Good to Great

Every good-to-great company faced significant adversity along the way to greatness, of one sort or another. … In every case, the management team responded with a powerful psychological duality. On the one hand, they stoically accepted the brutal facts of reality.

On the other hand, they maintained an unwavering faith in the endgame, and a commitment to prevail as a great company despite the brutal facts. We came to call this duality the Stockdale Paradox.

The name refers to Admiral Jim Stockdale, who was the highest-ranking United States military officer in the “Hanoi Hilton” prisoner-of-war camp during the height of the Vietnam War.


Tortured over and over again

Tortured over twenty times during his eight-year imprisonment from 1965 to 1973, Stockdale lived out the war without any prisoner’s rights, no set release date, and no certainty as to whether he would even survive to see his family again. …

You can understand, then, my anticipation at the prospect of spending part of an afternoon with Stockdale. One of my students had written his paper on Stockdale, who happened to be a senior research fellow studying the Stoic philosophers at the Hoover Institution right across the street from my office, and Stockdale invited the two of us for lunch.

In preparation, I read In Love and War, the book Stockdale and his wife had written in alternating chapters, chronicling their experiences during those eight years.


I am feeling depressed just reading the book

As I moved through the book, I found myself getting depressed. It just seemed so bleak—the uncertainty of his fate, the brutality of his captors, and so forth. And then, it dawned on me:

“Here I am sitting in my warm and comfortable office, looking out over the beautiful Stanford campus on a beautiful Saturday afternoon. I’m getting depressed reading this, and I know the end of the story!

I know that he gets out, reunites with his family, becomes a national hero, and gets to spend the later years of his life studying philosophy on this same beautiful campus. If it feels depressing for me, how on earth did he deal with it when he was actually there and did not know the end of the story?”

“I never lost faith in the end of the story,” he said, when I asked him. “I never doubted not only that I would get out, but also that I would prevail in the end and turn the experience into the defining event of my life, which, in retrospect, I would not trade.”


Who didn’t make it out?

I didn’t say anything for many minutes, and we continued the slow walk toward the faculty club, Stockdale limping and arc-swinging his stiff leg that had never fully recovered from repeated torture. Finally, after about a hundred meters of silence, I asked, “Who didn’t make it out?”

“The optimists? I don’t understand,” I said, now completely confused, given what he’d said a hundred meters earlier.

Another long pause, and more walking. Then he turned to me and said, “This is a very important lesson. You must never confuse faith that you will prevail in the end—which you can never afford to lose—with the discipline to confront the most brutal facts of your current reality, whatever they might be.”

To this day, I carry a mental image of Stockdale admonishing the optimists: “We’re not getting out by Christmas; deal with it!”

The ‘Stockdale Paradox’ is a concept, along with its companion concept ‘Confront the Brutal Facts’, developed in the book ‘Good to Great’ by Jim Collins. Productive change begins when you confront the brutal facts.

Every good-to-great company embraced what they came to call the Stockdale Paradox. You must maintain unwavering faith that you can and will prevail in the end, regardless of the difficulties, and at the same time, have the discipline to confront the most brutal facts of your current reality, whatever they may be.

It is subtle but it is a very important revelation that positive thinking isn’t enough. Whatever challenges you are facing personally, just keeping a positive attitude hoping everything will turn out ok isn’t enough. It’s accepting the brutal facts of your reality then taking action to move forward.


Thoughts for the week

By the way if you come across anything interesting that you think would work well as a blog for me to share please email me with the details.

June 19, 2022
Read More »
PrevPreviousThere is Hope and a Future
NextHe Believed in MeNext