I had to be cut out of my car 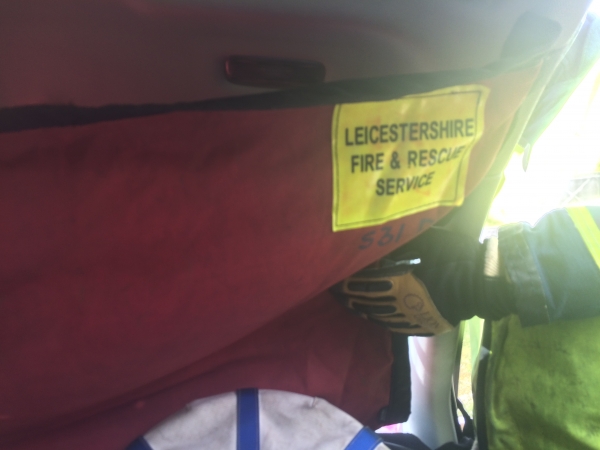 I will never forget the date of my accident, it was the 24th June – Brexit day. That morning I had presented what was arguably the best Mental Resilience talk I have ever given, to an appreciative business audience. The response was amazing and the written feedback was even better. I also sold more books than I have ever sold at a single event.

As you can imagine I was very happy, so much so, I decided to go back to the coffee lounge at the hotel and enjoy another cut of tea, to celebrate and soak up the feelings of euphoria. As I sat relaxing in the sunshine, I remember thinking that this is one of those golden moments which I need to capture and enjoy.

So after a long time of mindfulness, I decided to set off back home from Northampton along the A14 to Nottingham. The sun was shining and the road was clear for a Friday early afternoon. I remember listening to the lovely music as I cruised along the dual carriageway heading home for the weekend after a good week’s work.

To my dismay I noticed a warning sign to my left which warned of a queue ahead and I remember thinking that I would be delayed especially as it was a Friday afternoon. Then a bit further ahead I saw a second sign warning of a queue ahead and roadworks. As I slowed down I saw the red lights of traffic ahead and my heart sank at the thought of a long delay.

As I slowed down behind a white van I remember looking in my rear view mirror and I saw a small white car behind me with its hazard warning lights on and I remember thinking what a sensible thing to do warning the traffic behind them to slow down. Then suddenly this car moved to the inside lane and went past me on the inside.

The next thing I remember is my head hitting the airbag and extreme pain in my hips. I have two false hips and this pain concerned me. I also felt a searing pain in my spine where I have a prolapsed disc. I bounced back off the airbag and the force of my body hitting my seat caused the seat to lean right back.

As I started to come round to what had happened, shock set in and adrenaline coursed through my body to help with the pain. I looked around me and I saw that both airbags had activated and my radio had come out of its housing. I also noticed that the windscreen was broken on the left hand side. I later discovered that my IPhone had flown through the air and smashed the windscreen with the impact of the car hitting me from behind. I can still see the smoke coming out of the airbags and the destruction around me.

During the wait for the ambulance, several people came and held my hand to reassure me and this showed me how kind people can be. The road was closed and the air ambulance was called in for the passenger in the car behind me. When the medics arrived they assessed me and because of the pain in my spine and hips they didn’t want to risk any spinal injury by taking me out via the door.

So the fire brigade cut off the roof of my car, and got a board behind my back and six firemen lifted me out. I was then put on a stretcher and rushed to Coventry hospital. There was a team waiting for me when I arrived and they were amazing. They cut my shirt off and put my head in a cast to avoid any potential damage to my neck and spine.

They then gave me a full body scan and to my relief there was no spinal damage nor where there any broken bones or internal bleeding. It was just before I went in for the body scan that I asked one of the nurses to phone my wife Julie to let her know about the accident. I had been unsure when to tell her as I didn’t want her to panic. She took the news well and drove to Coventry to pick me up that evening.

It’s how you respond that counts

It felt like I had been in a 12 round boxing match, and I felt like that for the next couple of weeks. New pains and new bruising kept appearing especially around my hips, and this is still the case to a certain level. My hips are still hurting and my back still has some pain, as does my neck, but overall it could have been a lot worse and I am recovering.

The car which hit me at about 70 mph was a small Corsa – if it had been a larger car, a four-wheel drive, or lorry then I can only imagine the outcome of that scenario. I have come out of this well. My mindset is strong and I am driving again. As I say in my talks “it’s not what happens to you which counts, but how you respond to it.” I have responded well and I also believe that out of every adversity there is ALWAYS an equal or greater benefit.

The positive which have come out of this are:

1. I am walking and not in a wheelchair or worse
2. I have experienced the great emergency services we have, and how well they work together
3. I will get another car
4. I am married to Julie who has looked after me so well
5. I am able to use Julie’s car while I wait to buy another one
6. I have a great new story to tell in my talks
7. I have experienced airbags going off! (I don’t want to experience this ever again though!)