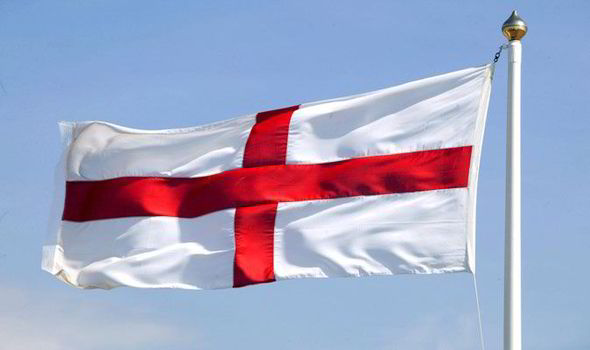 I came across this article in several national newspapers and I was impressed with the way Gareth Southgate has embraced positive phycology by hiring a top psychologist to work with the England football team.

The England Manager stepped out and made the player’s engagement with Dr Pippa Grange mandatory and I am sure Gareth will have seen some negative body language from the players, but he stuck to his belief that Mental Resilience is a fundamental key to success at the highest level in sport.

The mindset is crucial to success

The players are now fully engaged in the ethos of positive psychology and the results in the penalty shootout appear to demonstrate the effectiveness of this. Previous managers have used psychologists, but they made attendance optional not mandatory and that is why previous attempts failed.

Mental Resilience in the England Team

“As every Three Lions fan knows, this was England’s first World Cup win on penalties and their first in any competition since beating Spain at Euro 96.

Eric Dier and Jordan Pickford were among the heroes on the pitch, but off it psychologist Dr Pippa Grange has been helping the England team to strengthen their mental resolve – and it seems that her work has paid off.

A stroke of genius

Grange, 47, was hired by the FA last November to work with the national team and prevent them cracking under pressure as has happened in the past.

As the squad’s Head of Team Development, Grange has spoken individually with players about their ‘hopes and fears’ and ‘lifestyles’, and helped to establish the calmer, more positive atmosphere in the England camp.

His negative experience has helped the current team

Manager Gareth Southgate, whose 1996 penalty miss remains probably the most notorious in English footballing history, dismissed previous managers’ notions that practising penalties was pointless because nothing could reproduce the atmosphere of a shootout, and commissioned scientific research into the subject.

This found that England players tended to rush penalties compared to other teams, and indeed we saw on Tuesday a far more composed approach from those chosen to step up to the plate.

What a difference this has made

The change in style was evident when looking at Harry Kane and Marcus Rashford’s run ups, each taking time and steadying themselves in their own way.

Grange is said to have discussed an individual ‘penalty framework’ with each of the players, encouraging them to visualise scoring.

Other innovations in the England camp include ‘wellness questionnaires’ taken every day and ‘psychometric tests’ used to choose penalty takers in advance, avoiding the dispiriting spectacle of the manager begging players to take them after 120 minutes.”

It doesn’t guarantee but increases the chance of success

Mental Resilience isn’t a guarantee of success and there are so many factors which determine success or failure. You just need to look at the Quarter final match where Brazil scored the most bizarre own goal off a player’s shoulder which was instrumental in Brazil being knocked out of the World Cup.

But we dare to dream that England can continue to progress and last night’s result against Sweden is the thing dreams are made of. We can all ride the wave of national pride and see how far we can go. Come on England!!

1. Mental Resilience provides the tools to perform well under pressure.
2. Visualisation is powerful, if you can see the outcome in your mind before the event you increase the chances of seeing if for real
3. The England player have been told to visualise scoring the penalty over and over
4. A positive Inner Voice is crucial for top performance under pressure. You can see from the interviews with players that there is a calm confidence.
5. Gareth Southgate missed that crucial penalty in a shootout and he is using that experience to make sure our players reduce the chances of that happening to them.

Well that’s it for this week, when I send my next blog we will know how far we went in the competition – however it’s already a huge success and lift for the country whatever the final outcome!

Have a great weekend.

June 19, 2022
Read More »
PrevPreviousThe Day I Met MAGIC JOHNSON
NextIt’s Not What Happens but How You Respond!Next