Sugar is More Addictive than Cocaine! 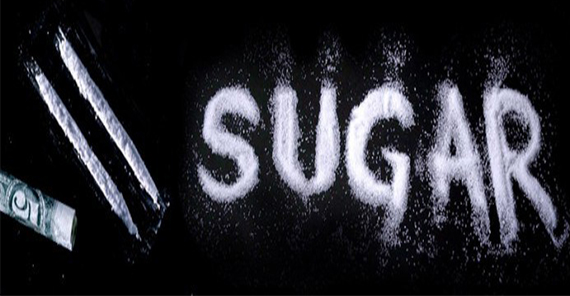 We hear a lot about addiction to caffeine, sleeping pills and alcohol. Can we really add sugar to that list? According to an increasing number of ‘sugar experts’ the answer is yes. Studies in mice have clearly shown that sugar is addictive. By manipulating their diet to include more or less sugar, or to produce a sugar withdrawal effect, scientists can produce similar behaviour to true drug addiction. What’s more, in a study by French scientists, rats chose sugar over cocaine – even when they were addicted to cocaine.

I attended a talk by a nutrition expert who showed us all the evidence regarding what happens to the carbohydrates we consume. He informed us that science has shown that carbohydrates which include sugar turn into glucose in the blood; which we need to function.

Lose the sugar and lose the pounds

This glucose is then distributed to all the receptors which require it, but here is the important bit: the excess glucose is deposited in a fat storing receptor. He said that basically this is the main way we put on unwanted fat, particularly around the waist, which is the danger area. So, the best way to get rid of belly fat is to stop eating sugar and carbohydrates (or drastically reduce the intake of these).

I have discovered in a few short weeks that I have lost a few pounds around my middle, have much more energy during the day and, most importantly, don’t get that energy dip I used to get in the afternoons. I feel really good in myself and don’t feel full all the time like I used to. I am in a more positive state about myself and by the Law of Attraction that brings in more good feelings.

Why do we crave Sugar?

The appetite for sweet things may be hardwired. Christine Gerbstadt, MD, RD, a dietitian and American Dietetic Association spokeswoman states that, ‘sweet is the first taste humans prefer from birth.’ Carbohydrates stimulate the release of the feel-good brain chemical serotonin. Sugar is a carbohydrate, but carbohydrates come in other forms, too, such as whole grains, fruits, and vegetables.

The taste of sugar also releases endorphins. These calm and relax us, and offer a natural ‘high’, says Susan Moores, MS, RD, a registered dietician and nutrition consultant in St. Paul, Minnesota. Sweets simply taste good. Rewarding ourselves with sweet treats, which can make us crave them even more, reinforces that preference.

It is fine to indulge in a sweet treat now and then, but the problems arise when we over-consume sugary foods. This is something that is very easy to do, as sugar is added to many processed foods including bread, yogurt, juices and sauces.

David Ludwig, author of Ending the Food Fight, and his colleagues at Harvard, did a very sophisticated study. They showed that foods with more sugar, foods that raise blood sugar even more than table sugar, such as white flour, white potatoes and refined starch, have what is called a high glycemic index.

This triggers a special region in the brain called the nucleus accumbens that is known to be ‘ground zero’ for conventional addiction, such as gambling or drug abuse. Part of the reason almost 70% of Americans are overweight or one in two Americans have pre-diabetes or Type 2 diabetes may not be gluttony, lack of willpower or absence of personal responsibility. It may simply be biological addiction.

This new study took on the difficult task of proving the biology of sugar addiction. The researchers did a randomized, blinded crossover study using the most rigorous research design to ward off any criticism.

They took 12 overweight or obese men between the ages of 18 and 35, and gave each a low sugar or low glycemic index milkshake (37%). Then, four hours later they measured the activity of the brain region (nucleus accumbens) that controls addiction. They also measured blood sugar and hunger levels.

Then, days later, they had them back for another milkshake. But this time they switched the milkshakes. They were designed to taste exactly the same and be exactly the same in every way except in how much and how quickly it spiked blood sugar. The second milkshake was designed to be high in sugar with a high glycemic index (84%).

A spike in blood sugar

The shakes had exactly the same amount of calories, protein, fat and carbohydrate. The participants didn’t know which milkshake they were getting and their mouth couldn’t tell the difference, but their brains could. Each participant received a brain scan and blood tests for glucose and insulin after each version of the milkshake. They were their own control group.

Without exception, they all had the same response. The high sugar or glycemic index milkshake caused a spike in blood sugar and insulin and an increase in reported hunger and cravings four hours after the shake. Remember – the milkshakes had exactly the same calories, sweetness, texture and macronutrient content. This finding was not surprising and has been shown many times before.

But the breakthrough finding was this: When the high-glycemic shake was consumed, the nucleus accumbens lit up like a Christmas tree. This pattern occurred in every single participant and was statistically significant. Experts say that it takes 28 days to detox from most addictive substances, and refined carbohydrates, such as white flour and white rice, are no exception.

White carbohydrates are so addictive because of the chemicals that travel from the stomach to the part of the brain where you produce dopamine, a hormone and neurotransmitter that affects the brain’s pleasure and reward centres. Once these areas of the brain are stimulated, you’ll keep on wanting more of the addictive substance, whether it’s alcohol, drugs or carbohydrates.

As the late great motivation speaker Jim Rhon once said: “Take care of your body. It’s the only place you have to live.”

4 thoughts for the week.

1. Observe your habits and see how much of your food intake is made up of sugars and carbs
2. If you want to maintain energy and lose the body fat around your middle, then you need to reduce sugars and carbs – exercise isn’t enough!
3. To develop Mental Resilience, you need consistent high energy, so removing the energy dips caused by sugar is crucial
4. It takes 28 days to get an addiction out of your system according to the experts, so work on this for that period of time and don’t let your Chimp win!!

Well that’s it for this week

Have a lovely weekend and stay positive